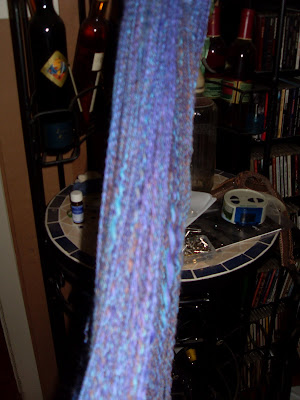 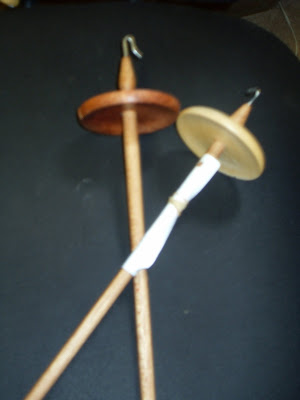 Knitting Wise I have managed to complete 2 pairs of socks (PSC) one that needs to have the cast on undone and cast off again (Note: do not cast off socks in the middle of tense olympic events). The Toy for the Easter show is all but done (Photos on completion). I have also spent a hell of a lot of time casting on and undoing Cedric the Celtic Dragon. For some reason I just cannot get the charts to not mess with my head. It is now frogged and waiting for some TLC

Stash Aquisitions have been limited to clubs (Knitabulous and Needlefood) and destash events (including some Purple Wollmeise and some Fleece Artist Lace - yet to arrive). The light is shocking today now that the rain has closed in so photos are a bit difficult.

To make up for the stash aquisition I may have been playing a litle with the spinning related aquisisions. First Up 2 drop spindles to see if I can make this spinning thing alittle more portable. They are Kevin Rhodes Spindles one is 29g the other 35g. They are just lovely. and I need to set about learning how to use them properly (a relatively blurry photo is shown above).

I have also (as a reaction to the shawl challenge) been spending some time completing the merino spin I started whilst I was on leave in January. Slack I know. The result which is about 220m is above on the left. Purple, Blue and Bronze.
Posted by jp at 9:16 PM 1 comment:

Wet Weekend and a Mixed Bag 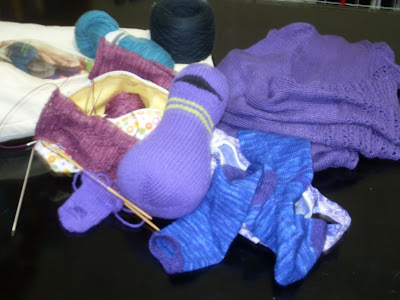 PROGRESSED
I have also now turned the heel on Sock 2 for the PSC July hearts and flowers socks from Wendy Knits in Yarn Pirate (Merlot) only three pattern repeats to go.
I am continuing on with the Purple Alsace Monster for the Easter Show Toy Cabinet. (He looks a bit like a purple Kermit at the moment without his bits).

NEW AQUISITIONS
Best of all Friday morning I was greeted by a new Yarn Club package from knitabulous. It included one ball of Mumbai Skies Lace Merino a gorgeous blue/grey.

And Did I mention the fantastic club drawsting bag that came with it which was immediately packed with projects for the Knitters Guild meeting on Saturday.

STARTED
I have started Cedric the Celtic dragon in the Blue Black Baruffa CashWool from Ailsa.
Posted by jp at 12:09 PM 2 comments:

Email ThisBlogThis!Share to TwitterShare to FacebookShare to Pinterest
Labels: knitting 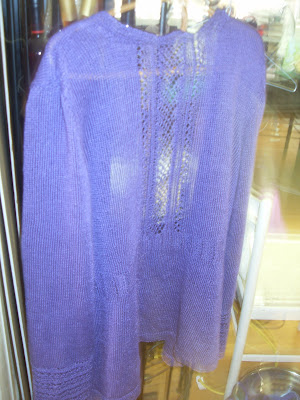 The Mountain View Cardi is done. I am going to do one more shaping block to straighten the bottom front and back and the neck.

Back View above and Front View below.
I still have to add some buttons but she looks lovely. Better photos will come when we have no rain and a bit of light. 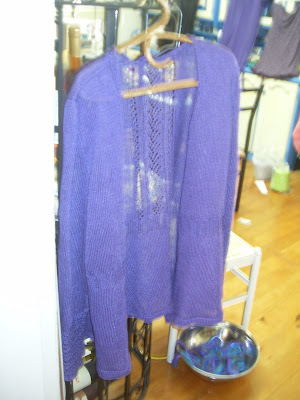