I have managed to finish my christmas gifts with a few days to spare.
Diamond Fantasy (With just one extra repeat for the scarf size) is blocking nicely 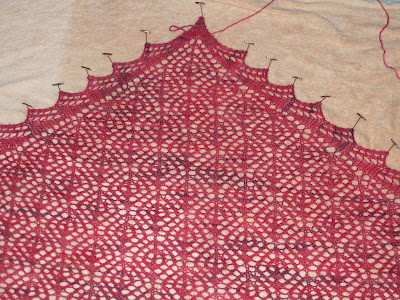 And my Rainbow Connection handspun for my MIL is all complate and just drying. All ready for Christmas day on Friday. 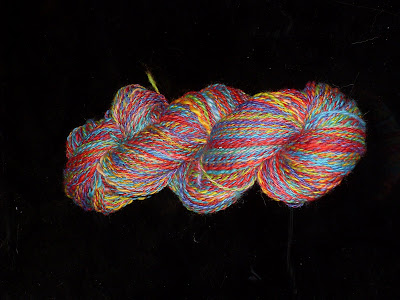 This year I have been slack and done absolutely no baking. A Very unusual situation but for a myriad of reasons. It feels a little odd.
Posted by jp at 11:33 AM 5 comments:

Oblivious To The Deadlines

This evening with a house full of family all doing their own thing I started spinning up some of msgusset wonderful roving in Jade. I am really loving this to spin. 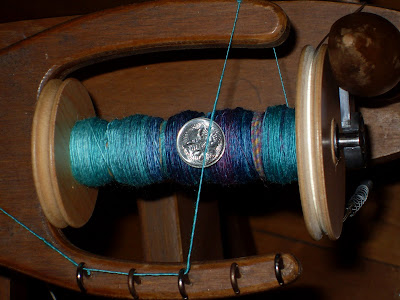 I am still working on (and making good progress) on the Diamond Fantasy shawl for my SIL with only 3.5 repeats to go before corners and edging (i-cord) so not too much to go. The pattern is divine very angular and definite - making it quite easy to spot errors and undo them quickly. I am also still working on the yarn for my MIL who is often at our house for school pick-ups in the afternoon - making it hard to complete the spinning.

I also managed a visit to the Morris and Sons Sale and only purchased Beads for the upcoming proposed insanity of 10 shawls in 2010 as well as some small cables for my knit picks options. (which seeem to go the way of socks and tape measures in my house).
Posted by jp at 2:22 AM No comments: 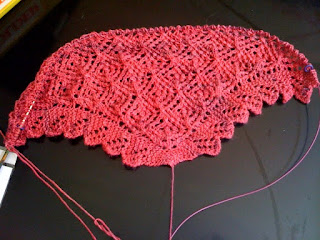 Started Saturday morning over breakfast on the way to a full day of knitting. It is progressing really well and the pattern is just stunning.

It's amazing what a full day of knitting, especially on the edge of Sydney Harbour will do to restore some knitting mojo.

Colourway - More than a Waitress. A Christmas present shawl for one my SIL's.

Birthdays and Celebrations and a tiny bit of Craft 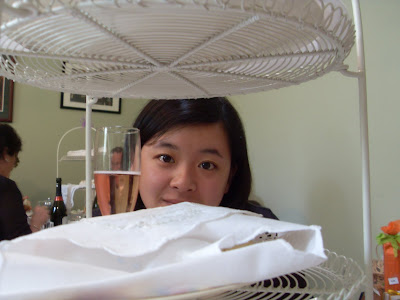 The last week has been hectic with a mid-week trip to BrisVegas for work and dh's birthday Thursday. This led into a mildy crazy weekend with work Christmas Party and The Whitlams at the Opera House Friday followed by Spinning Class Saturdaband the Morris and Sons Chrismas Celebration that was High Tea (with Bubbles) at the Harrogate Tea Rooms

Dh's birthday was a quiet affair with a small gift unwrapping during the day and the two of us at home that night (mainly as I had picked up a dreaded lurgy on my flying trip to Brisbane). He has been enjoying the Charley Boorman book I gave him and is yet to start the Eoin Colfer penned sequel to the Hitchhiker's series. He also gets to enjoy the new series of 30 Rock and Wii Cricket (which will tide him over between tests and one-dayers over the summer)

Friday night found me dashing out of works' christmas party hosted on the beautiful Sydney Harbour to the Opera House to see The Whitlams play all of Eternal Nightcap with the SSO (as the first half of the concert) followed by a range of other songs in the second half. The show was wonderful with highlights being Peter Skulthorpe's arrangement of "Out The Back" (that sounded like being in the ocean) and one of my favourites "Life's A Beach". I also can't miss saying that Tim Hall's songs off the Eternal night cap album were performed well (but not as well as he did them).

Saturday saw the last of my learn to Spin classes but we have overcome that by arranging a once a month catch up to keep the momentum. I will really miss the experience but perhaps not the early Saturday morning's.

Saturday afternoon was concluded with a High Tea with Bubbles at the Harrogate Tea Rooms as a Christmas Shindig for the Thursday night knitting troupe with a couple of blow-ins.
I was enjoying myself way too much to take lots of photos (one of a hnadful above).

We had arranged a kris kringle and I managed to make a few knitted baubles (Covering existing ones) some more below. That were used as make-shift earings. Colourful, easy to make and really adorable. 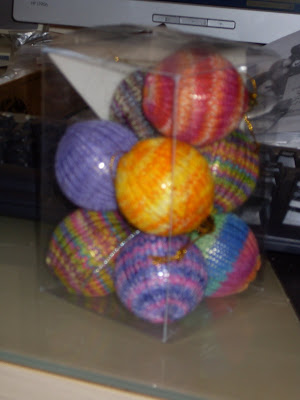