A few of you may know I am finishing up at my current job this week. I have recieved some cards and gifts from a few of my team members.

The most amazing of which is the knitted purse/bag below. All the more special as it comes from a staff member who is currently on extended leave after being diagnosed with breast cancer. She is doing really well (mid-way through her treatment) and is finding ways to occupy herself learning to crochet and knit (her mother is teaching her - but I have been engouraging). This is her first knitted item and she made it all herself (including the little rosette). 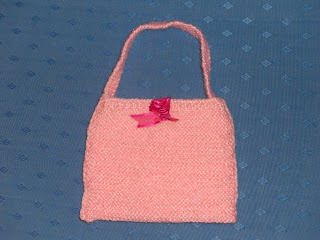 Another gift of note was a Thank-You card with a gift-voucher to a certain city bookstore. The card was heart-felt and thanked me for the opportunities, support and mentoring provided. At the end was a note that the bookstore in question has a 20% discount on craft books this week.

These simple gifts and the cards accompanying them have been wondeful because they acknowledge how well I have gotten to know these people and they me.
Posted by jp at 3:09 AM 5 comments:

I am currently spinning up some hand-dyed multi-colour silk to ply with some plain silk that I dyed earlier this year. Alas I have realised I might not have enough so I needed to dye up a little more. It has come out a little more muted (but I have enough of the original to mix it up with). The colours is Periwinkle and Royal Blue 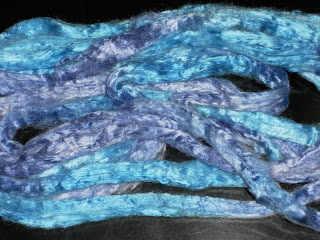 Whilst dyeing up the silk I grabbed a couple of hundred grams of merino fibre to paint up. I used Clematis and Periwinkle and the result is below. Still drying. 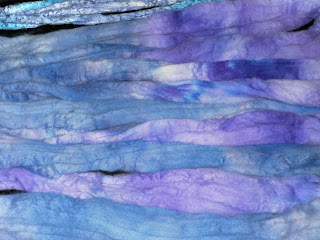 On the knitting front I am on to the cuff of the second sock for Ada Lovelace, the BCP shawl languishes awaiting attention.

On the stash front I may have acquired some Knitabulous Fifty Fifty as the base is being discontinued.
Posted by jp at 12:48 PM 3 comments:

Ada Lovelace In Progress (these are mine) 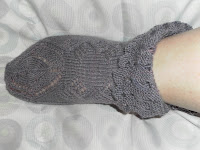 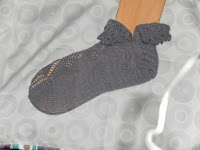 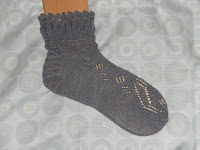 First sock done. In serious need of some blocking and better light for the photos.
The colourway has more subtle changes than this photo shows and the lace on the toes and the cuff is just gorgeous.

This week I have had a little bit of a strange week stash wise with more in than out.

Monday the five skeins of Knitabulous Fifty Fifty Yarn (That I just love) I ordered (before the 31st of January) that were dyed specially in a glorious blue leaning towards green tones. These are destined for a soft cardigan.

I continued to knit from stash although not enough knitting was done due to some very warm weather. My Ada Lovelace socks in Knitabulous Soft Sock were knitting up quickly after abandoing the Variegated colourway. The subtle colour differences in the semi-solid colourway highlighting the gorgeous lace pattern. I made absolutely no progress in the BCP shawl (but that is due to external factors).

I had been feeling quite virtuous as even though I had acquired yarn I had not purchased (well ordered) any in 2011. The week proceeded well with no signs of the

Last night I recieved notice that the lovely Knitabulous would have to discontinue the Fifty Fifty yarn and that the stock she had up on the web site is pretty much it oh and that it was on sale. Gasp! I have a few skeins in glorious purples still in my stash, as well as the Club colourway Tokyo Rose. I had recently been admiring the Blues and well I couldn't resist and two Blue skeins (different colourways) have been purchased and paid for. So discontinued yarns (and bases) are now an official exemption in my knit from stash for 2011.

And I have no photos. It was too hot (That is my excuse for all of it - the purchase, the lack of photos, the lack of knitting).

I should also note that I have successfully (so far) resisted the Madelinetosh Sweater Club which opened earlier this week - they even have Flashdance (colourway) as a choice which seems to be a stunning purple shot with bright pink.
Posted by jp at 11:38 PM 3 comments: