Last weekend Ailsa aka knitabulous launched her new website . We have often raved of her wonderful yarn and her truly inspired yarn club. Her silk lace weight is divine and her fifty fifty yarn heavenly in the most amazing colorways. Check it out.

I may have purchased the fifty fifty in Lilac (2 skeins) Vintage Lady (1 skein) and Ultimate Sock in Versace Gold. It arrived Friday morning before work. 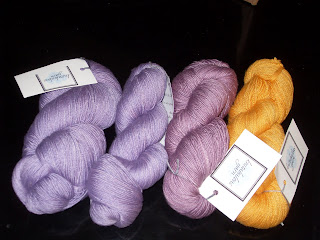 I also purchased some of the Yarn Lust yarn in the Crush Colourway it is even darker in person. My neice (3yo) has long coveted my Ishbel in this yarn so I picked up a 1 skein in their twisty toes. I also arranged to have 2 skeins customed dyed in the basic sock yarn. 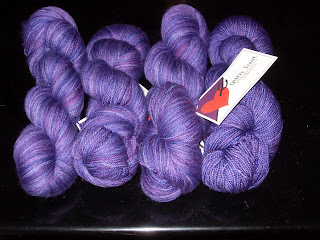 Is there anything like adding new yarn to your stash and contemplating the possibilities of what it might want to be?
Posted by jp at 5:13 PM 2 comments:

Let us not speak of the endless Election dramas.

Today I saw these and had to buy them they are just delightful very oldfashioned white roses with a burgandy red trim. They are cheering up the dining room perfectly. 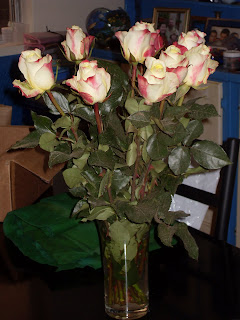 I have had this yarn (Colored Jules Wool on the Web) for quite a few years. Potentially almost as long as the classic Clapotis pattern has been around. 4 skeins has made a gorgeous large worsted weight shawl in blue with purple through it. Blocking today 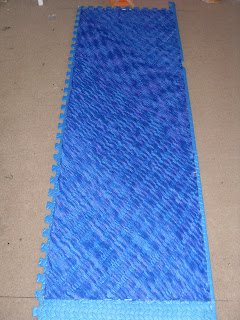 I have put the bright yellow sock aside for the time being and have commenced (and restarted) the Gossamer Garden Stole using my handspun. Lace on all rows. Yayyyy.
Posted by jp at 11:09 PM 3 comments:

The lyrics and sentiment resonate incredibly.

A chance to re-elect a female Prime Minister

Inconsistent policies from the major parties that seem only half-formed, and pandering to fear and discrimination. Both focused on slinging mud and talking each other down.

A campaign where policies have been mixed and the performance of the politicians at times apalling.

An inexperienced but long-running party who has fully formed policies that are based on humanitarian and environmental values and a vision for the future.

The question do I vote Red for my class or Green for my children (Our future?).

Lyrics
Another day dawns grey, its enough to make me spit
But we go on our way, just putting up with it
And when I try to make my feelings known to you
You sound like you have changed from red to blue

You're a father now, you see things in different ways
For every parent will gain perspective on their wilder days
But that alone does not explain the changes I see in you
The way you've drifted off from red to blue

Sometimes I think to myself
Should I vote red for my class or green for our children?
But whatever choice I make
I will not forsake

So you bought it all, the best your money could buy
And I watched you sell your soul for their bright shining lie
Where are the principles of the friend I thought I knew
I guess you let them fade from red to blue

I hate the compromises that life forces us to make
We must all bend a little if we are not to break
But the ideals you've opted out of,
I still hold them to be true
I guess they weren't so firmly held by you

Some music for your thoughts. 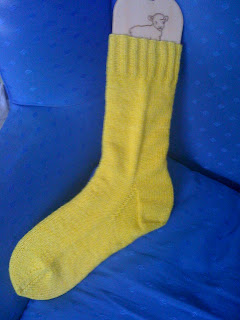 I hate crochet. I never really had the patience to learn how to do it well so my chains are eneven at best. So whenever a pattern says provisional cast-on I cringe and often put off starting.

Recently in Bendigo the lovely and talented Helen aka Bells mentioned the use of a version of longtail with two threads as an alternative to provisonal. So I went hunting for some alternatives.

I found these for those that share my irrational hatred.

Rosemary-go-round Using a crochet hook and a knitting needle.
An alternative as well as the standard method are described here. Using knitting a series rows courtesy of Techknitting.
The technique described by Bells (courtesy Knit and Tonic)

I love when a fellow knitter suggests an alternative.
Posted by jp at 7:26 PM 4 comments:

Green Feet For a Green Thumb and Thinking Knitting 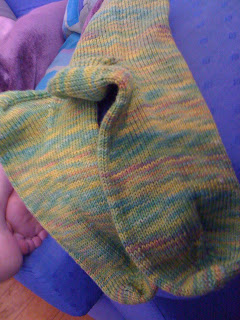 This week has been all about the Sock. After finishing my own Socks (post bendigo) I quickly cast on a pair for T in the Limited Edition Hand Dyed Sock Yarn from The Granny Square in Newtown. I finished them today whilst watching Back to the Future III the final instalment in a three weekend Back to the Future Film festival (Thanks SciFi TV).

Soft and silky with an almost bamboo feel the yarn is really joyous to knit with and has knit up really quickly. I used my basic sock pattern (as he hates pattern on his feet) and apart from his feet being soo big (they aren't that bad).

Yesterday I had a mind-blowing day at the Inner City group of the NSW Knitting Guild. Our guest speaker was Liz Gemmell who enthralled us with tales of her career in Knitwear design, teaching and exhibiting in the general meeting in the morning. We saw samples of amazing knitwear and homewear designed and knit by Liz and showing some unbelievable techniques and talents. Humble, entertaining and inexhaustible I am envious of her students at UTS where she teaches

In the afternoon I was lucky enough to be one of around 24 who enjoyed a special workshop (presented by Liz) on Knitwear design. From around 12:30 to 3:30 we were lucky enough to have a small sample of the skills and techniques and tools used by Liz to design knitwear shared with us. The amount of information and knowledge imaprted in this session was staggering in its insight and volume. I was exhausted at the end but most importantly I was truly inspired.

In Case of Emergency Break...out the Sock Yarn! 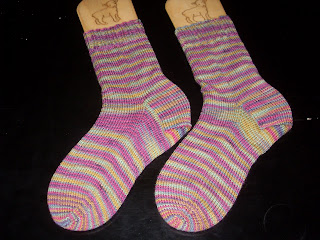 Whilst in Bendigo last month I had taken a shawl project with me. It was in 12 ply yarn in black a relatively simple knit as my travel project.

Unfortunately the lovely little house we stayed in did not have fantastic light in the lounge room and as such I made mistakes a number of times. Eventually abandoning the project all together. I went ahead and broke out the sock yarn I had bought for just such an occassion.

I used my basic sock pattern in absentia and cast on from memory (yes I managed to do it from memory. The yarn is Lorna's Laces sock in Watercolor colourway.

On returning home I had a couple of other projects to play with (See blanket and hat) and have just picked them up to finish them this weekend. I am really pleased with the striping effect the yarn has for all but the instep section.
Posted by jp at 3:22 PM 2 comments:

There is something incredibly satisying about finishing projects.

In the last few weeks I have been doing some solitary knitting due to a variety of circumstances and have managed to complete a large blanket (the Tweed Baby Blanket by Jared Flood) and a slouch hat for myself. 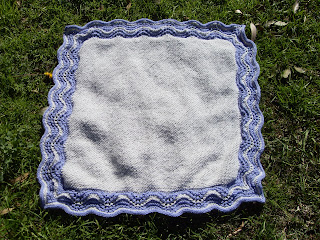 The blanket is a present for friends who have just had a baby. The yarn is Bendigo Woollen mills Luxury 8 ply and the colours are Ghost and Iris Mist. The perfect blanket for a fashionable baby girl.

The hat is another hat for me. - I don't make them that often. It is quite loose and lives up to the name of Copy-Cat Slouch Hat. The yarn is Needlefood Worsted in a special one off colourway that I have had for some time. (Stash-busting project perhaps). 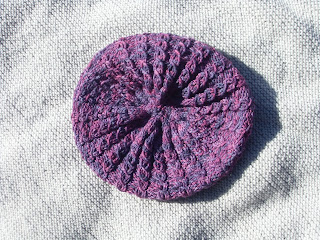 The opening of The Granny Square in Newtown was enough to entice me out this morning and we stepped into the store before 11. They didn't have the counter or the cash register set up.
We took our time to browse and eventually headed off for a drink and a bite to eat before we came back to make some purchases.

Below left is the Handspun and Hand-dyed yarn. Lace weight silk, wool, and cashmere. Cotton and Bamboo and Sock Yarn.

Below Right is the gorgeous light display of cotton and wool. 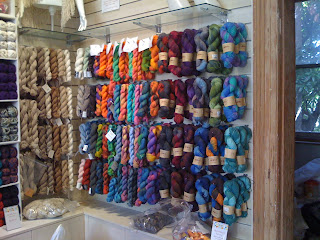 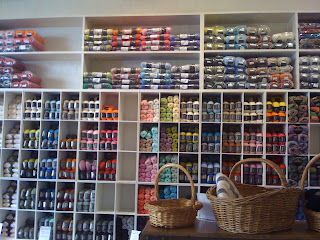 Of course you couldn't visit without making a purchase or two. 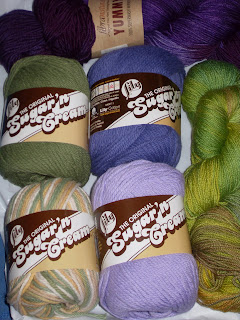 Whilst there I ran into Andrew (working), Miss Fee and Karen from Thursday night knitting and Miss Fee convinced me to crash her lunch date with Pru. An unexpected extension of my knitting store outing.
Posted by jp at 9:39 PM 8 comments:

Back to Basics - Knitting Basics that is.

An upcoming workshop at the Inner City Group of the NSW Knitter's Guild is around designing knitwear to fit. We have had some homework which was to complete at least one approximately 25cm Swatch. We then had to measure it and then wear it.

I have manged to do 4 (not the most exciting knitting but they do look kind of neat blocking as they currently are. I have used Elsebeth Lavold Silky- Wool in Black, Wollemeise Twin in Lavendel (We're different batch), Bendigo Woollen Mills Luxury 4 ply in Purple Storm and Grignasco Tango in Purple.

I have used Graph paper for the pre-blocking measurements and will trace the piece after blocking and again after wear.

I have edged each swatch with garter stitch to stop them from rolling up too much. The centre sections of each are stocking stitch. 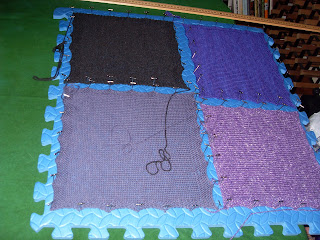 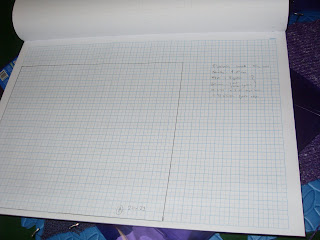 Project wise once I completed the swatches I started a Tweed Baby Blanket in Bendigo Woollen Mills Luxury 8 ply in Ghost and Iris Mist. The pattern is a huge garter stitch diamond edged in a lace pattern with purl ridges seperating each pattern repeat. An easy (if slightly endless knit).

It is destined for friends of mine who have just had a baby girl (I received the announcement on the way to Bendigo). I must note LynS' blanket was the inspiration and I jave just realised that by playing with the colours in the Mill Shop I have picked out exactly the same colours as Lyn used. They do look quite lucky. 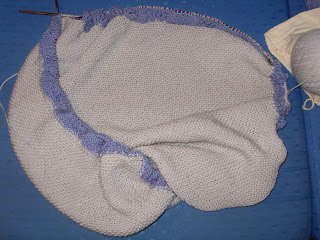 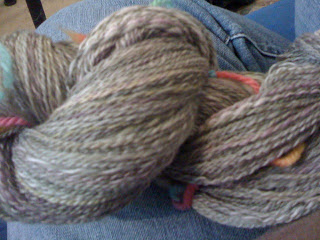 Greys and Greens with a hint of yellow and lilac.